Trail to the fortifications in Kotor

It is very easy to wonder around Herceg Novi and its old town by foot. A few sights to see are the churches, Kanli Kula fortress, Spanjola fortress, and the beaches. There’s also the Savina monastery located about a mile east.

Take the hiking trail from Old Town and climb up to the fortifications. The Old Town itself has many churches and shops to visit, including St Nicolas Church and St Tryphon’s Cathedral. There are also tourists boats that will take you to the previously mentioned islets in the Bay of Kotor.

Bar is a small town that can be explored in hours. It provides a good mid-way rest point when traveling on the balkan coast. Another option is to top at the town of Ulcinj which is slightly larger 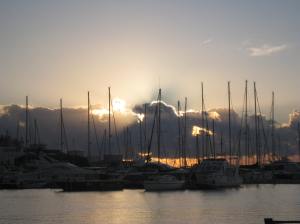 The trip from Dubrovnik to Herceg Novi, takes about 40 minutes by car, including border crossing. There are also daily bus departures. During summer season it will take longer to cross.

Traveling between Herceg Novi to Kotor by bus is fairly simple. Buses depart frequently. The route hugs the scenic Bay of Kotor. Look out for the islets Sveti Đorđe and Gospa od Škrpjela off the town of Perast. The latter has a church build on it. From afar it looks like a building floating in the middle of the bay. The bus station in Kotor is a quick walk to Old Town.

Traveling between Kotor and Bar is also fairly easy. The bus schedule is posted outside the bus station. It takes about two hours.

NOTE: It is a difficult to plan ahead and pre-book transportation in this area. There are no definitive websites with up-to-date, searchable schedules. The best resources for information were peer-supported sites such as tripadvisor or lonelyplanet forums. Some routes are not daily, or might have fewer buses during off-season so allot some flexibility when you’re traveling.

Here’s an example of a schedule found: Buses out of Dubrovnik

Focus around Kotor area and consider renting a car to facilitate traveling in between the towns.

← 1 Day in Bosnia and Herzegovina
1 Day in Macedonia →

4 thoughts on “3 Days in Montenegro”