Day 2: Spend a day in Old San Juan. Make sure to visit the tourism office across from the ferry dock. There is a tasting bar of Puerto Rican rums. A free tram will take you around town to all the touristic sites including El Morrow Fort and San Cristobal Fort.

Day 3: See the El Yunque rain forest. Go early to avoid crowds and easier parking along the sights. At the entrance of the forest there is a visitor’s center which cost $4 to enter. There are learning activities and a introductory film here. For simply a free trail map, go to the forest headquarter down the road. Here is the El Yunque trail map and some trail information I have gathered. The most popular site is La Mina Fall

s. People can swim to right under waterfall. Two trails lead to the waterfall. The Big Tree Trail is less flatter but the other trail runs along the river.

An alternative is the beach at La Cabeza de San Juan.

Spend the night in Fajardo if possible to get to the ferry early next morning.

Day 4: Take a day trip to Culebra followed by a Bioluminescent bay tour in Farjardo.

The main beach to go to is Flamenco Beach. There are $3 shuttle buses that will take you from the Ferry to the Beach. Another beach is Tamarindo, sting rays can be found here.

Depend on the season and day of the week, Ferry tickets to Culebra might be difficult to obtain. An alternative is flying from San Juan.

Day 5: Take the ferry to Vieques. Spend the night on the island and see more Bioluminescence at Mosquito Bay. This is the brightest bio bay out of the three in Puerto Rico.

Day 6: Head back to San Juan. Visit the Bacardi Factory in the afternoon and get two free drinks. There is a ferry goes between old San Juan and Catano. To get from Catano port to the factory is a $3 cab ride.

Day 7: Head west towards Arecibo and check out Cueva Ventana and/or Cuevo Camuy. Cueva Ventana is less known and less disturbed. It is also cheaper than Camuy. If time permits, check out the radio telescope at the Arecibo Observatory. Continue heading west and see the lighthouse and abandoned nuclear power plant at Rincon. Along the way some sites worth seeing are Banos de La Princesa as well as Crashboat Beach. Spend the night in Mayaguez (or Rincon)

Head to Boqueron for the night market and bars (1 dozen oysters for $5!) 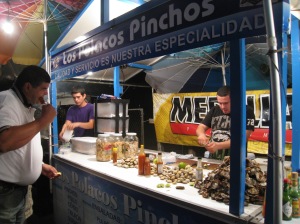 Along the way there are a few amazing sites to explore:

See the sunset at La Guancha (board walk)

There is a free tram that goes to the tourists sites in downtown, including Castillo Serralles, La Cruceta del Vigia, Catedral de la Guadalupe, and Parque de Bombas, where the tourism office is. Map of Downtown Ponce

Ponce is a great snorkeling spot. There is a marked underwater snorkel trail in Caja de Muertos, an island off the coast.

A few towns over in Coamo are the hot springs (Piscinas-Aguas Termales). It is a fairly new facility with two small ponds but the entrance fee is only $3.

Further east, north of Guayama is the Carite Forest. A famous spot is Charco Azul – a nature pool where the water is cold and refreshing.

For more Bio Bay, head to Parguera for the night. Although this one is not nearly as bright as the others.

On the way back to San Juan, stop by Guavate, which is famous for its lechon (grilled pork). If time permits, take a detour to San Cristobal Canyon.

In Old San Juan there is a hostel located right in Plaza Colon called Posada San Francisco. It is near the bus depot and the ferry dock.

Public transportation around the island is not suitable for going to some tourist places like forests, caves, and beaches. There are buses that take you from major city to city across the island. I strongly recommend a rental car.

The transit system within San Juan is alright. There is a cheap ferry that will take you from Hato Rey to old San Juan for $1. It’s worth it to take a ride along the mangrove-lined channel.

The ferry to Culebra and Vieques are amazingly cheap as well. A round trip ticket for a 1+ hour boat ride costs under $5. However, on weekends and high summer season (May-August) It could be a nightmare getting a ticket. There is no reservation system. Some legends claim 3-4 hours of waiting under the hot sun and still not guaranteed boarding after obtaining ticket because of boat capacity. An alternative is flying from San Juan, which costs $70-80 (about the same as a cab ride from San Juan to Fajardo) I arrived 1 hour early, parked for free on the side of the street, and got my ticket after standing in line for 10-15 minutes for the 9 am ferry. This was on a Thursday in late August. Note: there is cargo ferry also takes passengers but the cabin is windowless and cold – it won’t be a joyful ride.

The first four days of the itinerary will give you a taste of what Puerto Rico has to offer.